AirShock® is a world only automatic air gun for seismic enhanced oil recovery (EOR). AirShock® gun is installed downhole against perforations. Compressed air or nitrogen supplied into AirShock® gun via tubing triggers the gun and it starts firing repeatedly every3-4 seconds. Each AirShock® gun sudden pulse results in a compressed bubble in the well liquid. The compressed bubble instantly expands and thus generates a sudden large liquid displacement. The displacement creates a pressure wave travelling through the formation fluids.

Uniqueness of the AirShock® technology is in the steepness of the wave front, capability to produce very high wave amplitudes and pressure pulsing frequency without damaging the casing and finally in more flowing to wells.

Importance of the steepness of the wave front: The higher steepness of the wave front, the higher gradient of pressure between two or more neighbor pores areas. This will result in the stronger local flow perturbation between these areas and accordingly in enhanced gravity segregation, coalescence of droplets, modifying fluids’ properties, improving rock effective permeability to hydrocarbons, and reducing channeling during miscible and immiscible floods. An additional mechanism is the transient particle rearrangement which can cause a momentary change in the dimensions of pore throats and release entrapped oil.

Importance of the wave amplitude: Wave energy attenuates with the distance from the well because of energy adsorption factors and geometric spreading, so the higher initial amplitude the larger reservoir area the enhancing effect will cover.

AirShock® delivers maximum energy downhole and directs it exactly at the target zone.

AirShock® is simple to setup and operate. 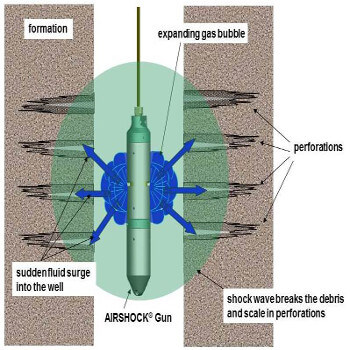 Phase I, first 5-15 msec: the AirShock® Gun is downhole and is firing against the perforations: sudden high-pressure gas release from the gun’s internal chamber creates a powerful shock wave. The shock wave is followed by a rapidly expanding gas bubble that generates a short fluid surge into the perforations.

Phase II, next 50-70 msec: The gas bubble immediately starts contracting creating a strong flow back into the well . The expanding and contracting process repeats itself several times until all energy is spent. 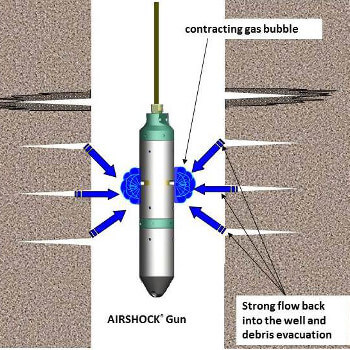 This process continues as long the gas supply to the AirShock® Gun is open and the tool is firing.